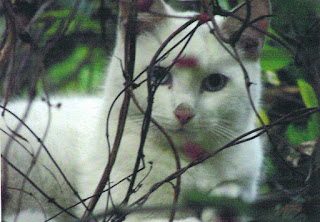 This lyrical excerpt from “The Song of the Jellicles” in T.S. Eliot’s Old Possum’s Book of Practical Cats aptly describes the night behavior common to feral cats.  My husband and I first noticed our “Jellicle Ball” a few years ago when we discovered the elusive white feral cat, photographed from a distance with a zoom lens, living in the wooded hillside adjacent to our house.

Feral cats, the “wild” offspring of domestic cats, result primarily from pet owners’ abandonment or failure to spay or neuter their pets.  The unfortunate result of such pet owner negligence is uncontrolled breeding of cats.  Such was undoubtedly the plight of our newly-found feral feline, because, within a few days, we discovered her three white kittens that appeared to be about five or six weeks old.  Generally feral cats, quite elusive and untrusting of humans, shield their offspring from people, such as colony caretakers and others, until they are at least that age.  It wasn’t long before we realized that we had an entire colony of feral cats inhabiting our wooded property.  It was a “Jellicle Ball” indeed!  Presently, in addition to the snow-white family, there is a motley assortment of additional cats that make up the colony:  A  tan and white cat, a black one, a black and white mix, a yellow Tabby, and a Himalayan or Siamese mix are the ones that we see predominantly, though others occasionally come and go.
Though initially “wild”, our colony can now be referred to more specifically as a managed colony.  I began to feed our family of feral cats, and my husband eventually took steps to control their breeding.  The Feral Cat Coalition, an organization offering spaying and neutering services through licensed veterinarians at no cost to the community, made it possible for us to do so. Using the humane traps provided by the organization, we managed to trap and have spayed or neutered most of the cats in the colony.  Of course, it’s necessary after the surgeries to return the cats to their colony area.  Since the surgeries, we haven’t noticed any new kittens in the area.

Even though some feral cats manage to survive by foraging for food in dumpsters and hunting bugs and mice, many die mercilessly outdoors from starvation, disease, abuse, or as food to a predator. I’m reasonably sure that my decision to feed the colony for the last few years, much to my neighbor’s dismay, doesn’t exactly make me the patron saint of animals in his eyes.  I’m sure he views me as the weird cat lady who persists in feeding what he perceives as nuisances that he wishes would just go away.  I do have respect for the patron saint of animals, Saint Francis of Assisi, and for the many Christians everywhere who celebrate the feast of St. Francis each October 4th by blessing their pets in his name.  However, I’m not about to lead a procession of my three house cats and the feral cats to church for a blessing anytime soon.  Assuming responsibility for feeding the colony just seems like the humane thing to do.
Initially the cats in the colony kept their distance when we began leaving food for them to discover.  That was fine with me.  I didn’t want pets after all; I just couldn’t watch them starve.  I began leaving food under a huge evergreen tree a safe distance from our house. At that time, the white cats were the only ones we observed in the area.  They soon began to trust and depend on the food being there.  I avoided any attempts to befriend or touch them though.  In a strange way, I felt as though touching them, even if they were to let me, would make them mine.  I didn’t want that kind of involvement.

Not only did I avoid touching the cats, I refused to name any of them in the beginning.  One names children and pets.  These, as I have asserted before, would not be pets. But we’ve not got so far as names before a cat will condescend to treat you as a trusted friend.  Some little token of esteem is needed, like a dish of cream. ………A cat’s entitled to expect these evidences of respect.  And so in time you reach your aim and finally call him by his name.  T.S. Eliot’s words eloquently describe the progression of events that eventually made it necessary to address the cats in the colony by name.  It became necessary because, even though feral cats, serious hunters, normally have ways of communicating availability of food to other colony members, the white cats who had taken up residence under the big Pine would not allow any of the cats of color to partake of the food that we would leave under the tree.  I’ve witnessed only one cat of color who was ever welcomed into the white cat inner circle beneath the big Pine.  Appearing suddenly one day, she was a slender beauty with some yellow markings on her predominately white fur.  Possibly she was a mix of the white family bloodline and, therefore, accepted into their clan. – But her delicately chiseled face with soulful eyes and her sleek build seemed a stark contrast to her huskier hosts. I likened her to a Tennessee William’s fragile Blanche DuBois – “I’ve always depended on the kindness of strangers.” – taken in by the more robust Stanley Kawalski’s.  After a six month stay, little Miss DuBois disappeared as suddenly as she had appeared.  Because she had rarely strayed from the colony area beneath the Pine and seemed too fragile to survive on her own, I fear she met with an unfortunate fate.  The white cats have shown no such hospitality to any cats of color since.

I imagine all animals have a pecking order, but the discriminatory practices of the white family resulted in our jokingly referring to them as the Klan.  We eventually had to place additional food for the other cats closer to the house to keep it safe from the Klan.  As trust in us became more apparent and personalities began to emerge, we named the cats of color as well.  The black feral cat, who seemed quite the snoop, was dubbed Boston Blackie.  Fortunately, the Himalayan mix, tagged Himmie, was later trapped and given a home and a new name by another family member.  The yellow Tabby became Tigger, and the black and white mix became Buddy simply because she seemed to be Tigger’s cuddling buddy - except of course when Tigger would sometimes go away for days at a time and Buddy, less trusting of the other cats, would become a loner.  A couple of years ago, Tigger disappeared for two weeks preceding Christmas.  We had begun to worry that she had met with some tragic fate.  On Christmas Eve of that year, my husband, returning to the house from feedingour feral friends, announced, “Guess who’s come home for Christmas?”  The prodigal Tigger had returned.  She and Boston Blackie still go off on occasional treks but usually return within a short period of time.  The more timid Buddy always stays closer to the food and shelter we provide.
The more compassionate part of me would like to welcome the entire colony into my home, but the pragmatist in me realizes that wouldn’t be a viable solution.  Not only would it be impractical to have so many cats within the confines of my small home, but I already have three aging house cats with delicate sensibilities that happen to think that they are masters of their domain.  If I alone ruled the roost, I would at least allow the cats to take winter shelter in our garage.  I realize, however, that the garage, being practically sacred domain to my husband, would not be an option either. At my urging, my husband did build three wooden houses that we stuffed with straw and tucked under the big Pine and hid among the large shrubs bordering our home.  Needless to say, I didn’t manage to stay emotionally uninvolved with the colony.  I befriended, I touched, and I made them mine.  And now, when summer skies give way to occasional violent storms, I always feel concern for the safety and comfort of our feline charges.  As I write this, and as Autumn brings brisk breezes and frosts that nip, I have begun once again to dread the winter snows that invariably follow – the snows that bend the sheltering bows and blanket the cats’ homes -  the frigid temperatures that dangerously dip to freezing and frequently far below.  And I invariably pray that each coming winter will not be as harsh as the last, that the cats will survive without too much discomfort - and then I figuratively kick myself for not living in Florida.