Reality Television: The Dumbing Down of America 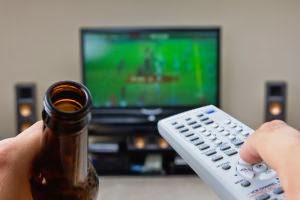 Critics of reality TV programming think that watching reality TV numbs the mind of any intelligent thought and contributes to the dumbing down of America.Jay Rifenbary’s article, “Ponder This – Reality TV is Dumbing Down America”, claims that the dominance of reality programming as a source of entertainment is indicative of a destructive trend of encouraging the masses of the television viewing audience to escape from reality, rather than participating in it. Such negative influence can contribute to the dumbing down of America.

What is Reality TV?

According the the CBS News article, “The Real Deal on Reality TV”, the decade-old program, “Survivor”, is credited with being the reality TV program that changed television programming to its core. The success of “Survivor” prompted the creation of many programs of similar format.
Television programmers discovered that the reality TV format had become a successful craze. They also discovered a different and unexpected TV viewing appetite. They discovered a desire to watch people with no perceptible talent and no apparent insights, but who are perfectly willing to be seen and heard doing pretty much nothing of importance. Programs such as "Real Housewives", "Girls Behaving Badly" and the "Jersey Shore" are some prime examples of such programming. Producers discovered that TV audiences enjoyed watching people in situations that were at one time considered inappropriate. Producers also discovered that reality TV programs were much cheaper to produce than regular programming.
How Does Reality TV Contribute to the Dumbing Down of America

Reality shows continue to increase in popularity. Jay Rifenbary’s article, “Ponder This – Reality TV is Dumbing Down America”, expresses concern regarding the obsession of both viewers and producers of reality TV. He is fears the obsession sends a negative message as to what our society’s priorities are. He fears that wealth, fame, notoriety and vanity are becoming the priorities of society.

One reason, according to  Rifenbary, that reality TV is dumbing down American audiences is that the programs are a welcome distraction for viewers from having to take accountability for their own personal and professional issues and problems. Reality TV programs provide an opportunity for viewers to judge, ridicule and debase others, and, in the process, falsely boost their own sense of self-importance or self esteem.

In conclusion, the impact of reality TV can be debated, but, quoting Rifenbary, “The reality is that there must be a foundation of perspective when deciphering what is presented. If no foundation exists, then any individual is vulnerable to what reality television presents and defines as success and happiness. That would be an uneducated understanding of reality.” That would indeed contribute to the dumbing down of America.


MJImages
Posted by Melissa at 12:24 PM No comments: