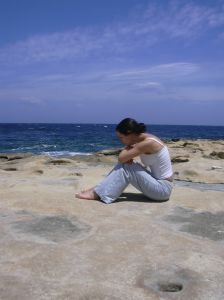 When Greta Garbo famously said, “I want to be alone.” – maybe she really meant it! Studies show that there has been a major demographic change in America. There has been a significant increase in the number of Americans living alone.
Henry David Thoreau wrote, “I love to be alone. I never found the companion that was so companionable as solitude.” Apparently some people in America today agree as there has been a sharp spike in the number of Americans who live alone.
Eric Klinenberg, N.Y.U. sociology professor and author of the book, Going Solo, in the New York Times interview, “America – Single and Loving It”, claims that single living is an exploding trend. He feels attitudes toward single living are becoming much more positive and more accepting. In addition, Klinenberg reports that, for some, single living is both a privilege and a liability.  For others in today’s world, he feels single living may be a more desirable lifestyle alternative to cohabitation.
Statistics on Single Living
According statistics reported in the article, “America - Single and Loving It”, one in seven American adults now live alone. This number is a dramatic increase from the decade of the 50”s. In 1950, only 22% of Americans lived alone, but most recent studies show that today the number has increased to almost 50%. Studies show that approximately 4 out of 10 households are single-person dwellings. In Manhattan alone, nearly half of all households are comprised of just one person.
Why the Number Americans Living Alone is Increasing
The article, “Why More Americans are Living Alone”, reports that the reasons for the increasing trend of single living are varied.  One reason is that so many Americans are unmarried. Others are just finishing their education and embarking on their chosen career paths, and, as a result, are choosing to live alone in their new venture. Still others, who may have never intended to live alone, find themselves doing so due to divorce or death of a spouse or significant other. Finally, there are Americans for whom living alone is a deliberate and much preferred lifestyle choice.
Why Living Alone for Some Americans Doesn’t Mean Being Lonely
It may appear to outside observers that so many singles would be lonely. However, according to the article, “Live Alone? You’re Not Lonely”, contrary to the Beatles lyrical claim, one is not the loneliest number. Those choosing to live alone enjoy the benefit of such simple things as being able to control their own time on their own terms, to eat and sleep when they want, to read or watch television when they want, and to socialize with others of their own choosing whenever they want.
The article further suggests, that, even though there is an increasing trend of Americans  living alone, such a lifestyle  is not normally considered a natural state of affairs. The article suggests that those who choose such a lifestyle and claim to prefer it is a small percentage. The article claims that, because single dwelling goes against our baser instincts, those people who choose and prefer to live alone are just somehow wired differently from those who do not.
Picture credit: Enrica Garroni
References:
PBS News Hour: “Why More Americans are LivingAlone”
CBS News.com: “Live Alone? You’re not Alone”
The New York Times.com: “America- Single andLoving It”
﻿
﻿
Posted by Melissa at 12:41 PM No comments:

I was a school teacher for 30 years. As a teacher, just like many teachers, I have willingly fulfilled many duties and responsibilities beyond just teaching. I have mentored, counseled, disciplined, and sometimes served as a peace-maker, negotiator, and even a nurse. I will always remember when we were asked to routinely inspect our students’ heads for lice – not exactly a teaching responsibility, but  I, as most teachers, did it without complaint. But I was never asked to serve in the capacity of an armed security guard within the school.
In the wake of Newtown and other tragic school shootings, the dialogue about gun control again became a topic of controversial political debate.  The suggestion of some to arm teachers also became of topic of debate. The National Rifle Association declared it the best response to serious threats. But even in the most conservative states, most proposals failed in the face of resistance from educators or dire warnings from insurance companies that schools would face higher premiums and liability.
Arming teachers has become a reality in one small school district in Arkansas, however. In strongly conservative Arkansas, gun ownership is common and gun laws are permissive. Even so, no school district in Arkansas had ever used the law to arm teachers on the job, according to the State Department of Education – until Clarksville.  The Clarksville, Arkansas School District has opted to open their school doors for the new school year with teachers locked and loaded, as the expression goes.
Superintendent David Hopkins explained, "We're not tying our money up in a guard 24/7 that we won't have to have unless something happens. We've got these people who are already hired and using them in other areas," Hopkins said. "Hopefully we'll never have to use them as a security guard." Such a statement is worthy of skepticism and scrutiny.
There are dissenters and understandably so. Arkansas Education Commissioner, Tom Kimbrell, is opposed to the idea of arming teachers and staff. He prefers to hire law enforcement officers as school resource officers. There are other dissenters, too. Donna Morey, former president of the Arkansas Education Association, called the idea of arming teachers awful. “The risk of a student accidentally getting shot or obtaining a gun outweighs any benefits,” she said. "We just think educators should be in the business of educating students, not carrying a weapon," Morey added.
There are dissenters among some of the parents of students in the Clarksville school district, as well. At least one mother cited the program as being one reason she's taking her son, an incoming eighth-grader, out of Clarksville's schools before the school year begins. It is her firm belief that teachers should not make life-or-death choices involving students. "I think police officers are trained to make those decisions, not teachers," she is quoted to have stated.

In response to the national discussion of arming teachers in schools, Kenneth S. Trump, President of National School Safety and Security Services, stated, "The vast majority of teachers want to be armed with textbooks and computers, not guns." Trump added, "School districts considering arming teachers and school staff with guns would take on significant responsibility and potential liabilities that I firmly believe are beyond the expertise, knowledge-base, experience, and professional capabilities of most school boards and administrators.”
He pointed out that school boards, school superintendents, principals, teachers, school safety experts, and public safety officials, nationwide, don’t believe that educators and school support staff should be armed. "Suggesting that by providing teachers, principals, custodians, or other school staff with 8, 16, 40, or even 60 hours of firearms training on firing, handling, and holstering a gun somehow makes a non-law enforcement officer suddenly qualified to provide public safety services is an insult to our highly trained police professionals and a high-risk to the safety of students, teachers, and other school staff," Trump said.
Trump is a 25-year veteran school safety expert who has trained school and public safety officials from all across the United States and Canada. He suggested that school districts setting policy to allow teachers and school staff to be armed with guns would take on an enormous amount of responsibility and potential liability.

I tend to agree with Trump’s position regarding the controversy of arming school teachers in the classroom. It seems short-sighted on the part of supporters of the idea of arming teachers to believe that teachers who enter a profession to educate and to serve a supportive and a nurturing  role with their students could be expected suddenly to kick into a mindset of shooting and killing someone in a moment’s notice. Law enforcement officers train their entire careers to perform their duties with preparedness and life-safety mindset that is different from the professional training and mindset of teachers, no matter how many hours of gun training the teachers are given in “preparedness” to be locked and loaded in the classroom.
﻿
Posted by Melissa at 11:30 AM No comments: